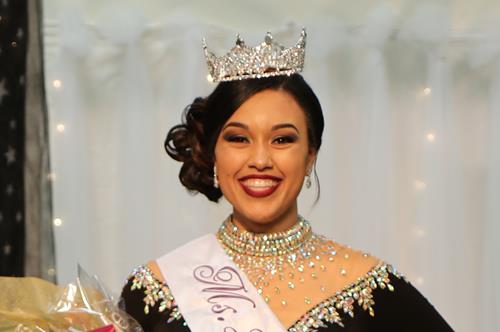 In the 59thedition of the Ms. LSUA Pageant, Saije Cousin came away with the crown and will represent the university at all official functions over the next year.

Saije is a junior majoring in Pre-Medicine/Biology and is from Slidell. She is a LSUA Ambassador, a member of the Black Organization for Leadership and Development and the National Society for Leadership and Success. Her topic was Mental Health Awareness in Domestic Violence Victim: Looking Past the Smile.

The first runner-up in the pageant was Stacy Fussell. Stacy is a senior majoring in Elementary Educaton and is from Pineville.

Second runner-up was Gracie Joiner. She is a junior Kinesiology major from Boyce.

Ms. Congeniality (voted on by the other contestants): Blair Murray

Ms. Photogenic (voted on by the audience): Anaice Hackett

People’s Choice Award (voted on by the audience): Kaelyn Rachall

The Ms. LSUA Pageant is open to all female students regardless of age or marital status. Contestants compete in casual and eveningwear categories and answer a question pertaining to their platform topic. Each contestant also participates in an interview with the judges prior to the pageant. All participants have a mentor form the university faculty or staff.

Monica Berenice Aguilera, is from Forest Hill and a sophomore Nursing major.

Raven Layne Chatelain, is a freshman Nursing major from Hessmer.

Saije Elizabeth Cousin, a junior majoring in Pre-Medicine/Biology and from Slidell.

Stacy Nicole Fussell, is a senior majoring in Elementary Education and is from Pineville.

Anaice Kay Hackett is from a junior Communication Studies major from Lafayette.

Greshria Brishon Joiner is from Boyce and a junior majoring in Kinesiology.

Tracy Danielle LaCaze is a senior English major from Pitkin.

Blaire Catherine Murray is from The Woodlands, Texas and a sophomore Nursing major.

Click here to view the contestant requirements and to fill out a registration form.