“We grew up in poverty. At times it was so bad I can remember eating at our local soup kitchen with homeless people sitting beside me,” said Louisiana State University of Alexandria Fall 2020 graduate, Fayla Brown.

Brown, a Marksville native, had a tumultuous childhood. From dealing with her parent’s divorce, being separated from her siblings, growing up in poverty, and getting in trouble with the law, Fayla ultimately dropped out of high school at the age of 16.

“I felt like I had already failed and was too far gone,” she said. “I had so many negative influences and dropping out seemed to become my only option.”

The despair didn’t end there.

At 19, Fayla’s mother was killed in a car accident. She was distraught and utterly defeated. But by an act of God, Fayla claimed, she received a phone call shortly after her mother’s death telling her to apply for a job with the Ekhaya Youth Project working with at-risk teens.

“This was my saving grace,” she said. But as Fayla began working and mentoring youth in Central Louisiana, she realized something was missing.

“The kids I worked with were inspiring me, it was time for me to flip the script. I needed to be better for them, for my community, but most importantly, for myself.”

Brown, and a teen she mentored, decided to enroll in a GED program. Upon studying and completing the tests, she earned her high school diploma in March of 2016.

Gaining a bit of confidence, Fayla decided to try and enroll at LSUA; however, her past indiscretions caught up with her. She did not meet admission standards at that time and was unable to enroll. LSUA referred her to LSUE through the Pathways to Success program.

“I was terrified all over again. After not being able to get in to LSUA, I felt like I wasn’t good enough and didn’t belong in college, but the Pathways to Success program was amazing. I learned so much about myself and had so many people rooting for me. All of the LSUA faculty who taught my classes were waiting and willing to help,” Brown said.

Through this program, Fayla was able to eventually enroll in LSUA in the spring of 2019; however, the fear kicked in again.

“I had the worst semester of my academic year then. I was so nervous because I was finally at a four-year college. I had hyped it up too much in my mind and let my fear take over. My advisor, Dr. Rob Wright, was amazing though. He walked me through it and encouraged me to stick with it.,” she said.

Regaining some confidence, Fayla began taking more credit hours a semester and earning better grades. By taking 18-24 hours a semester, she was able to graduate with a Bachelor of Science in Psychology in 3 ½ years. So excited about her graduation, Fayla participated in the drive-thru commencement that LSUA held on December 18. Although her family was unable to attend due to the COVID-19 restrictions, they were able to watch her walk across the stage via the live stream to receive the diploma-- one moment of triumph to exemplify a lifetime of obstacles.

And she’s not done yet.

Fayla has been accepted into a master’s degree program at Stephen F. Austin in Nacogdoches, Texas to earn a Master of Social Work. To ensure she completes the program, she has even pushed back her wedding until the fall of 2022 after she should graduate.

“I know my journey isn’t complete,” Fayla said. “I want to keep furthering my education, so I have all the skills needed to help those like me. My passion is to change lives the way mine was. I want those dejected to know that once you give way to fear, there is so much waiting for you on the other side. LSUA was my light at the end of the tunnel. Everyone there was waiting on the other side to help me through and now I have a future without limits. I am blessed.” 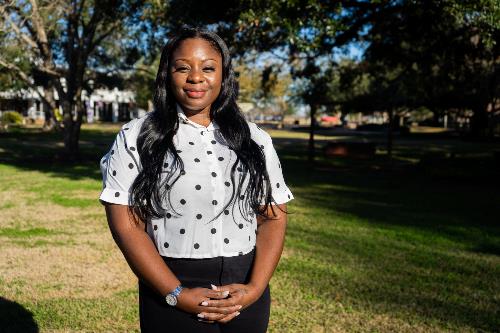